It is based on analyzing our autosomal chromosomes (largest chunk of our DNA). All we have to do it provide a saliva sample. 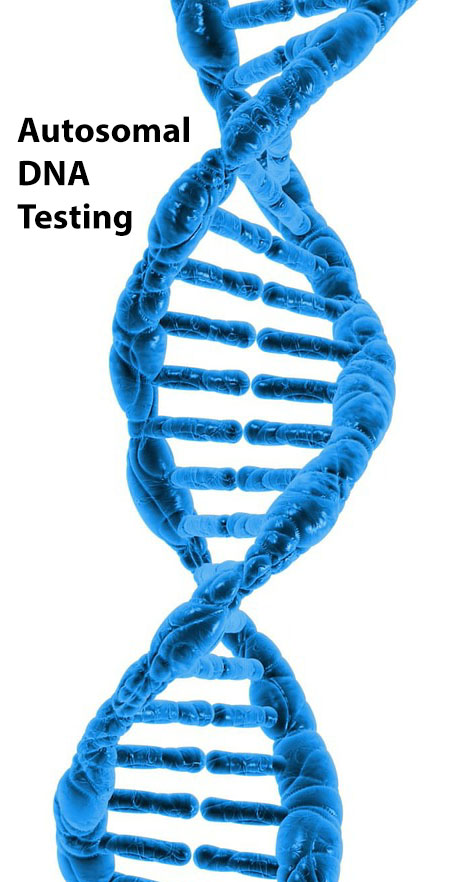 What are autosomal chromosomes anyway?

Analysis of autosomal chromosomes is perfect for 2 things:

The autosomal DNA test is the most important of all DNA tests.

That’s why we’ll go through some very interesting questions (and misgivings) are autosomal testing (and we’ll even share the best autosomal DNA tests in the end) that include:

Understanding how autosomal testing works will make you value the results of DNA tests much more.

What Is Autosomal DNA?

Autosomal DNA is such a large part of our genome that we might as well call it just “DNA”. In shorts, it’s an incredibly big chunk of our DNA.

In fact, the word ‘autosome’ comes from Ancient Greek: ‘auto’ means ‘oneself’ and ‘soma’ means ‘body’. That means that auto-somal DNA literally means ‘oneself’s body’ or ‘our own body’ because the autosomal DNA encompasses such a big part of our whole DNA.

Note: Autosomal DNA tests take into account 22 autosomal chromosomes + X chromosome that we all get from our mothers.

From Whom Do We Get Autosomal Chromosomes?

Autosomal DNA serves as a genetic tracker throughout centuries of time. That is only possible because of the following principle:

We get one set of chromosomes from each parent. That’s why half of our autosomal DNA is from our mother and the other half is from our father.

All DNA tests look at specific genetic markers (known as Single-Nucleotide Polymorphisms or SNPs for short). These markers are used to match our DNA with the DNA of our ancestors.

In general, the number of specific DNA markers you have is reduced by 50% every generation back you go. The further back you go, the fewer SNPs from that person you will have in common.

How Many Generations Does Autosomal DNA Go Back?

As you can see, the share of autosomal DNA markers is cut in half with every generation. In fact, autosomal DNA tests can accurately predict your ethnicity background going back 6-10 generations.

After the 10th generation, the DNA data is not sufficient enough to make an accurate enough estimation about your ethnic background.

The oldest generation of autosomal DNA can uncover (with sensible accuracy) is usually the 8th generation. This serves as useful information for everybody who is trying to put together their genealogical family tree with European, African or Native American ancestry.

Here’s how this calculation goes: The 18th-century European ancestor is 8 generations before you. Because the SNPs are reduced by 1/2 every generation, we simply calculate: (1/2) to the power of 8.

This gives us the result: 1/256. This means that our European ancestor from 18th Century shares with us 1/256 SNP markers. That’s much less than 1% of autosomal DNA.

The 10th generation ancestor, for example, shares less than 1/1000 of autosomal DNA with us. Such a small amount is usually not sufficient to make a match with any degree of accuracy.

In short, autosomal DNA tests are accurate. However, accuracy depends on how many generations back you want to go.

Nonetheless, the autosomal DNA testing is most frequently (and reasonably) used to pinpoint our 2nd generation ancestors (grandparents and other second cousins). This is to ensure the accuracy of the DNA testing results.

The problem, of course, if that the guys with the biggest database – Ancestry.com – primarily provide autosomal DNA testing. For Y-DNA testing, we have to check out with the genealogists that are best at determining where your ancestors have originated from – 23andme.

Which Autosomal DNA Test Is The Best?

What is important to remember is that every company is somewhat specialized for specific types of DNA tests and specific purposes. What does that mean in practice?

You have to decide what you want to know. Usually, people are using autosomal testing to answer one of these two questions:

Ancestry.com is specialized for genealogy and building family trees. Their autosomal DNA test is the best for answering “Who am I related to?” simply because they have the biggest database of people who took their test.

That means that when you take their autosomal DNA test, they will have millions and millions of people who could potentially be your relatives. In fact, they have 20 million people they can connect you with the autosomal DNA test.

Other DNA tests are not less accurate or anything; they simply don’t have such a large database of people that they could match you to.

If you want to find out your ethnicity, you should be looking for the autosomal DNA test that can pinpoint the largest number of regions your potential ancestors came from.

Translation: the best ethnicity autosomal DNA test should have the largest number of regions.

Here’s the difference between a bad and good ethnicity DNA test and what they tell you:

The basic principle is that the best ethnicity DNA test will truly pinpoint the location your ancestors came from down to not only a continent (Europe) or a country (Germany) but down to an individual province (Bavaria) or even a city (Bremen, Berlin, Hamburg, Cologne, etc.).

The 23andme.com ethnicity test is the best not because it’s that much more accurate or of high quality. It’s simply because they have the largest amount of regions – they now have 1000+ regions – that your ancestors could have come from.